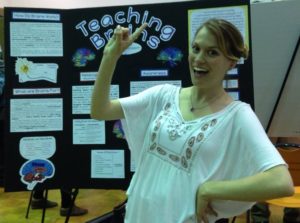 A few years ago I got this idea in my head that kids should learn about brains. I did a research project about it and wrote some lesson plans. It became central to my philosophy of teaching. Finally, this year, I’ve started teaching these lessons in my kindergarten classroom. They are going really well! I’ll talk more about that in a later post, but today, I’d like to talk about the need for this untaught area of study:

Currently education is failing in what I perceive to be its primary function, which is preparing humans for the experience of life by teaching them how to optimally use their brains. The brain is pretty much the sole beneficiary of education, since today’s schools tend to downplay the importance of physical education, which is its own problem that I won’t address in this post. However, the brain is almost never even referred to in the current curricula. The Common Core Standards don’t mention it (I checked). While the scientific community accrues more and more information about the human brain, children are left out of the loop.

We used to know so little about human brains, and guessed so much. Now we can quantify, predict, and even manipulate its inner workings. We must pass these achievements on to our youngest children to give them the greatest advantage when facing life’s inevitable challenges.

This has massive implications. Anything can be practiced. This places a huge responsibility on each child to decide to practice things that mold their brains the way they want. It’s especially powerful for them, because neuroplasticity decreases after the age of about 5. My students are the perfect age to learn of this amazing power, when its use can be most effective.

It’s important to note that while brains do become less plastic with age, every person can benefit from the same awareness of the brain’s abilities. We all have the power to change ourselves, to literally, intentionally, change the physical structure of our brains. It takes time and work and lots and lots of practice, but it is possible.

You can look at the guiding slides for my first two brain lessons HERE and the original lesson script drafts are HERE.